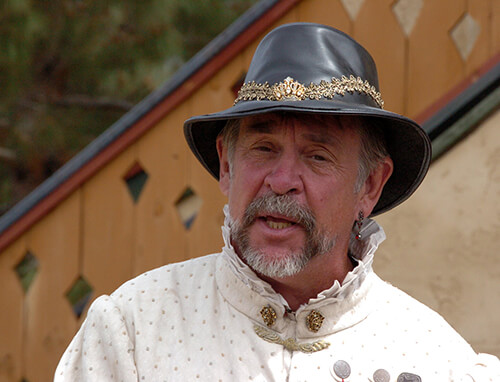 They are called “plays,” and that is what we are going to do. If you want a serious look at Shakespeare’s work, “Pray thee look not hereupon, for we seek silly here.”

A bit about playing Shakespeare and faking Shakespeare. Secrets of thee, thou and thy, word patterns and tropes. “The play’s the thing.” And we do mean play.

This BloxShop will “lend a kind of easiness to the next.” Despite all the fuss, Shakespeare was an actor trying to make a buck. Remember that the scholars, professors, and intellectuals were not who Shakespeare wrote for – he wrote for actors first, and the audience (many of whom were drunk and rowdy) next. So let’s join the party!

Jon Benda has been with NBOJU for 16 years. He has studied and performed in improv, interactive theatre, classic theatre, children’s theatre. Not to mention being part of the Arizona Renaissance Festival for many a year.

His greatest strength is in interactive theatre and has studied with Gary Izzo among others. He want actors to play at the top of their game.