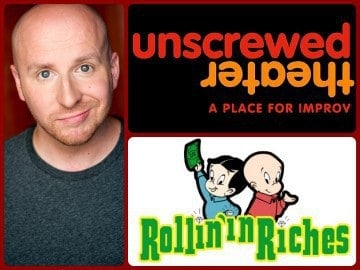 Rich Baker has improvised on stages across the country for the past 17 years. He began in his hometown of Fort Worth, Texas studying with Four Day Weekend and has since performed with ComedySportz Chicago, The Second City, The iO Theatre, Norwegian Cruise Ships, Mission Improvable and many other theatres. Currently his two man group Rollin’ In Riches is on their 2016 tour where they’ve performed in Alaska, Las Vegas, Sacramento, Tucson, Denver and many other super fun cities. He’s taught improv since 2007 and currently teaches independently and as a staff member at Second City Hollywood. If he couldn’t do comedy, Rich would pursue a career in science, because science rules!

Students will learn how to make up rap lyrics to a beat on the spot in a variety of rap games like Rap Line, Beastie Rap, Pass the Mic, Historical Rap Battle and more. It may sound scary, but anyone can learn to freestyle rap with some tried and true techniques and lots of practice.

Students must be 18 years or older. TUITION IS NON-REFUNDABLE.

Online ticket sales end at 10am on the day of the workshop.